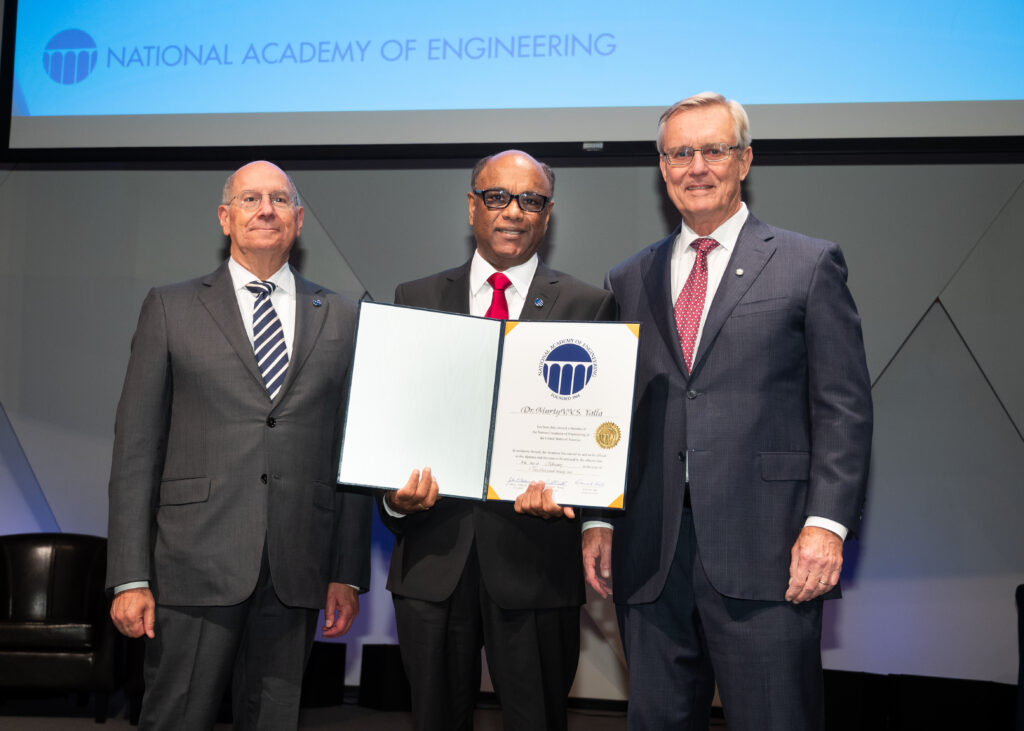 On October 2, 2022, Dr. Murty V.V.S. Yalla was honored in Washington, D.C. with a formal induction ceremony at the National Academy of Engineering (NAE) Annual Meeting. Dr. Yalla is Vice President & General Manager for Beckwith Electric, a business unit of Hubbell Utility Solutions. He was elected to the NAE in 2021 “for contributions to digital protection and control devices for the grid.” Election to the NAE is among the highest professional distinctions accorded to an engineer.

The NAE is part of The National Academies of Sciences, Engineering, and Medicine. The NAE operates under the same congressional act of incorporation that established the National Academy of Sciences, signed in 1863 by President Lincoln. Under this charter, the NAE is directed “whenever called upon by any department or agency of the government, to investigate, examine, experiment, and report upon any subject of science or art.”

From 1988 to 1989, Dr. Yalla taught and conducted research on digital power system protection at Memorial University in Newfoundland, Canada. After joining Beckwith Electric in 1989, Dr. Yalla held various leadership roles, including company president from 2005 through December 2020.

Dr. Yalla is the chairman (2015-2024) of the International Electrotechnical Commission (IEC, Geneva, Switzerland) technical committee (TC95), measuring relays and protection equipment. He leads subject matter experts from 34 countries in the development of international standards in power system protection and control.

Dr. Yalla is also the chairman of the IEEE Power & Energy Society (PES), Power System Relaying and Control (PSRC) committee from 2021 to 2022 where IEEE standards, guides and reports related to power system protection are developed.

He served as a U.S. delegate to the international council on large electric systems (CIGRE, France), working groups on protection of generators and power transformers. He was a member of the North American Electric Reliability Corporation (NERC) System Protection and Control Subcommittee (SPCS). Presently he is a member of the Industry Technical Support Leadership Committee (ITSLC) of the IEEE PES, serving as a liaison between IEEE PES and NERC. He also serves on the planning committee of the Georgia Tech protective relaying conference.

Dr. Yalla was the chairman of the working group that developed IEEE Standard C37.102-2006 “Guide for AC Generator Protection.” He co-authored an IEEE PES tutorial on the “Protection of Synchronous Generators.” He was the organizer of the IEEE PES GM Tutorial on Distribution Volt VAr Control and Optimization in 2015, 2016 and 2018, as well as the IEEE PES GM Tutorial on Cybersecurity of the Electric Power Transmission and Distribution Systems in 2017, 2019 and 2020.

Dr. Yalla has published several research papers in IEEE Journals and various conferences. He holds six U.S. patents in power system protection and control. He was elevated to the IEEE Fellow grade in 2006 “for contributions in computer relays for power systems.” He also received various other awards including the IEEE Florida Council Outstanding Engineer Award in 2005 and 2018, the IEC 1906 Award in 2010, and the Indo-U.S. Chamber of Commerce Businessman of the Year Award in 2013.

Further information about the mission of the National Academy of Engineering and the achievements of its distinguished members can be found at www.nae.edu.