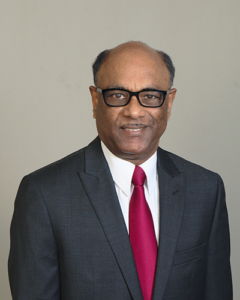 The NAE, established in 1964, is a private, independent, nonprofit institution that provides engineering leadership in service to the nation. Its mission is to advance the well-being of the nation by promoting a vibrant engineering profession and by marshalling the expertise and insights of eminent engineers to provide independent advice to the federal government on matters involving engineering and technology.

From 1988 to 1989, Dr. Yalla taught and conducted research on digital power system protection at Memorial University in Newfoundland, Canada. After joining Beckwith Electric in 1989, Dr. Yalla held various leadership roles, including company president from 2005 through December 2020.

Dr. Yalla is the chairman (2015-2024) of the International Electrotechnical Commission (IEC, Geneva, Switzerland) technical committee (TC95), measuring relays and protection equipment. He leads subject matter experts from 34 countries in the development of international standards in power system protection and control.

Dr. Yalla is also the chairman of the IEEE Power & Energy Society (PES), Power System Relaying and Control (PSRC) committee from 2021 to 2022 where IEEE standards, guides and reports related to power system protection are developed.

He served as a U.S. delegate to the international council on large electric systems (CIGRE, France), working groups on protection of generators and power transformers. He was a member of the North American Electric Reliability Corporation (NERC) System Protection and Control Subcommittee (SPCS). Presently he is a member of the Industry Technical Support Leadership Committee (ITSLC) of the IEEE PES, serving as a liaison between IEEE PES and NERC. He also serves on the planning committee of the Georgia Tech protective relaying conference.

Dr. Yalla was the chairman of the working group that developed IEEE Standard C37.102-2006 “Guide for AC Generator Protection.” He co-authored an IEEE PES tutorial on the “Protection of Synchronous Generators.” He was the organizer of the IEEE PES GM Tutorial on Distribution Volt VAr Control and Optimization in 2015, 2016 and 2018, as well as the IEEE PES GM Tutorial on Cybersecurity of the Electric Power Transmission and Distribution Systems in 2017, 2019 and 2020.

Dr. Yalla has published several research papers in IEEE Journals and various conferences. He holds six U.S. patents in power system protection and control. He was elevated to the IEEE Fellow grade in 2006 “for contributions in computer relays for power systems.” He also received various other awards including the IEEE Florida Council Outstanding Engineer Award in 2005 and 2018, the IEC 1906 Award in 2010, and the Indo-U.S. Chamber of Commerce Businessman of the Year Award in 2013.

According to the Academy’s press release on Tuesday February 9th  announcing this year’s electees, membership bestows honor on those who have made outstanding contributions to “engineering research, practice, or education, including, where appropriate, significant contributions to the engineering literature” and to “the pioneering of new and developing fields of technology, making major advancements in traditional fields of engineering, or developing/implementing innovative approaches to engineering education.”  Election of new NAE members is the culmination of a yearlong process.

The 2021 Class includes 106 nominees from the United States and 23 international members. The Induction Ceremony for Dr. Yalla will be held during the NAE’s Annual Meeting in Washington, D.C. on Sunday, October 3, 2021.

“I am honored and humbled to be recognized by the NAE and join such an elite group,” said Dr. Yalla. “I am truly indebted to my teachers, mentors and professional colleagues from whom I have had the opportunity to learn throughout my career. I look forward to continue to learn and collaborate with other prestigious members of NAE. I am also grateful to Beckwith Electric Co. (now part of Hubbell Utility Solutions) for nurturing and encouraging innovation which made it possible to develop the first digital interconnection protective relay in the US during the late 1980s. This greatly helped increase renewable energy or distributed energy resources (DER), on the electric grid.”

Further information about the mission of the National Academy of Engineering and the achievements of its distinguished members can be found at www.nae.edu.