Why is Ferroresonance Protection (59I) for Cabled Inverter Systems important?

Traditionally when customer owned synchronous and induction generators (DGs) are connected on the utility distribution system, the main issue is islanding of the DG causing personal safety opportunities for line crew working on the feeder. Customers connected to islanded DGs are also subjected to excessive variation of voltage and frequency causing equipment damage. Another major issue is the occurrence of ferroresonance when distribution capacitor banks resonate with DGs (induction generators) causing highly distorted over voltages.

Over the years, Beckwith Electric has partnered with various utilities to develop the peak overvoltage detection function. This detects ferroresonance conditions and quickly disconnects the DER from islanded distribution system, eliminating the personnel safety concerns and equipment damage. The peak overvoltage detection function can also detect islanding of inverter based DERs if the system exhibits large distorted voltage spikes during islanding.

Now with the high penetration of inverter based Distributed Energy Resources (DERs), the protection problem became more challenging due to dramatic reduction of fault current levels (much below the traditional overcurrent relay pickup settings) supplied by these DERs. 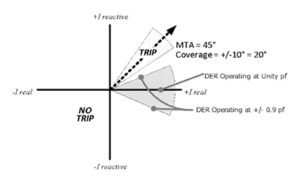 The inverter based DERs limit their fault currents between 1.1 and 1.3 times the full load (rated) current. It is not possible to set the traditional over current relays which are typically set between 1.5 and 2 times the full load current. So to trip DERs for faults on the line, present methodology requires sending a transfer trip to the DERs. The focus directional overcurrent relay trims down (focuses) the directional angles around expected angle during a fault (as shown in the figure) to keep the relay from misoperating during various loading conditions. The FDO allows sensitive protection without compromising the security.

IEEE 1547 defines limits for these with harmonic components up to 50th harmonic. This means any measuring device that is used to measure THD and TDD must sample the voltage and current waveforms greater than 100 samples/cycle to accurately measure THD and TDD. Total Demand Distortion (TDD) is a percentage of maximum demand and thus addresses the heating caused by harmonic currents. High harmonics can be caused by DERs due to failure of the switching components or filter capacitors in pulse width-modulated converter/inverter designs. The THD and TDD levels can be measured up to the 63 rd harmonic by presently available recloser controls and feeder and DG Interconnect relays with sampling rates of 128 samples/cycle that can send alarm signals to alert the DER owners. If severe enough, excessive TDD can trip and isolate the DER to keep rest of the system from power quality problems.

For additional company or product information, please browse our website or contact a local Beckwith Sales Partner or Regional Sales Manager office near you. Also, no matter when and where you want to connect with us, Beckwith Electric strives to deliver relevant information to you through our social media channels. Get up-to-the-minute headlines, watch our videos, and stay up-to-date with News and behind-the-scenes information. We look forward to sharing and connecting with you.

Would you like to discuss your application with a Senior Application Engineer?

Contact us directly using the online form below. Please complete this form and press Submit. *Required